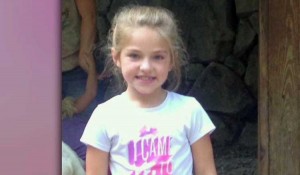 Imagine this. You are returning home from a New Year’s celebration with your family. Your sister, cousin, mother and dad are in your father’s plane. Everyone is happy and having a good time … until your father announces there is something wrong with the engine. The plane crashes, and everyone onboard dies except you. You are strapped into your seat, hanging upside down, cold night is approaching and you do not know where you are.

Now imagine that you are just 7 years old. As hard as it may seem to believe, this actually happened in January of 2015 to Sailor Gutzler. Thanks to the survival skills her father taught her, this amazing young girl freed herself from the plane wreck that killed her entire family and walked three quarters of a mile in dark, unfamiliar woods before she spotted the lights of a house.

When Kentuckian Larry Wilkins answered the knock at his door Friday night, January 2, the last thing he probably expected to see was a cold, bleeding and disheveled 7 year old girl. Sailor Gutzler calmly announced that her mom and dad were dead, and she had been in a plane crash. She made it to his home after crossing 2 large embankments, a hill, a creek bed and crowded, woody brush in darkness.

Because of the survival skills her father taught her, she incredibly had the presence of mind to light a stick on the flames which were coming from her family’s wrecked Piper PA-34 plane. She then used that makeshift torch to make her way the three quarters of a mile to Wilkins’ home.

Sailor’s parents, Marty, 48, and Kimberly, 46, sister Piper, 9, and cousin Sierra Wilder, 14, were all killed in the crash. Approximately 40 minutes after her father reported engine trouble to air traffic controllers, the young girl appeared at Wilkins’ doorstep and he immediately called 911.

Amazingly, the survival lessons her father taught her gave Sailor the resourcefulness she needed to pull herself from a wrecked plane as she hung upside down, strapped into her seat, with the bodies of her family around her. Even with a broken wrist and multiple scratches and scrapes from walking through brambles and bushes in cold and near darkness, the young girl never forgot the emergency survival tactics her father taught her.

The lesson to be learned? It is never too early to start teaching your children valuable, and possibly life-saving, survival skills and how to compile essential emergency supplies ahead of time. Take your children camping, show them how to make fire, teach them the importance of staying calm, like Sailor did, in the face of an emergency. Involve them in your disaster preparedness plan. Children are like sponges. They absorb everything around them. So make sure you are giving your kids the ability to make smart, life-saving emergency decisions just like this brave young girl did.