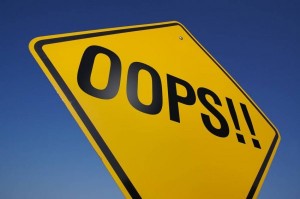 Odds are, you are making at least 1 or 2 of the following 3 prepper mistakes that are wasting your time, effort and hard earned money. I don’t know your level of disaster preparedness, whether you are a newbie or a veteran. But as an occasional gambler, and usually a profitable one, I usually try not to buck the odds. That means that the following information dictates you may be making some common emergency preparedness mistakes.

80% Of The 3 Million US Preppers Are Doing It Wrong

Consider the following pieces of information:

Now let’s do a little math. If 80% of the 3 million Americans attempting to prepare for a long-term emergency situation are incompetently doing so, that means 2.4 million US preppers wasting their time, energy, money and resources. 8 out of 10 means that you are, simply using the law of averages, probably making some common prepper mistakes.

Where does that 80% figure come from? The Pareto Principle, also known as the 80 – 20 rule, was first explained by Italian economist Vilfredo Pareto. Attending university in 1896, he noticed that 80% of effects or production comes from 20% of the effort. He noticed this across agriculture, plant production, in land ownership, economics, politics and, across cultures and demographics and in any area the study.

Unfortunately this means that of the estimated 30 million United States citizens thinking about preparing for a disaster or catastrophe, 24 million will be failures. Go against the odds and stop making the following 3 prepper mistakes which are unfortunately all too common in the disaster preparedness community.

1 – Buying Too Many Survival Gadgets, Instead of Developing Skills

Hey, I like emergency preparedness gadgets and survival gear just as much as the next guy or gal. Those cool 10 in 1 combo tools look really awesome, and there is no end to the gadgets and gear you can buy. But a head full of survival skills and limited resources is better than no survival knowledge and all the survival gadgets in the world. Your mind is the most important tool when it comes to your family’s survival, so sharpen it frequently. And stop spending money on useless gadgets you will probably never use or need. Naturally, emergency food, water and essential survival elements need to be secured in bulk, but we still recommend learning survival skills in addition to making sure your food supply is adequately stocked.  You may find that you end up in an emergency situation that is not within proximity to your food storage, and you may be forced to live of the land for a period of time.

2 – Betting All Your Money on Black

Here I go with the gambling references again. What I am alluding to is the propensity for preppers to focus almost all of their efforts on one doomsday scenario or area of disaster preparedness. If you think the Yellowstone super volcano is going to trigger the end of the world, fine.

But what if it is economic upheaval instead? Do not focus on just one source of a global catastrophe. Prepare for anything and everything. And don’t get stuck storing all your food, gear, water and survival necessities in one place. Spread your eggs out over several baskets, in case one of your survival locations is compromised.

3 – Not Developing and Practicing An Effective Evacuation Plan

Believe it or not, a lot of otherwise intelligent preppers have never once written down a plan of evacuation from their current living situation. Maybe this is because they live in a relatively secure location, and they do not feel the need to evacuate.

However, you never know what is going to happen in this crazy, drama-filled and increasingly dangerous world. You absolutely must develop, and systematically practice, a disaster evacuation plan or you may as well not prep at all.