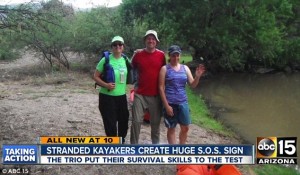 It was supposed to be the perfect getaway. But what started out as an idyllic kayaking trip among 3 friends from Arizona went horribly wrong rather quickly. Only a few hours into a river outing that was up until then beautiful and enjoyable, the inflatable kayaks the trio were using were slashed beyond repair by jagged river rocks and submerged tree limbs.

The 3 managed to make their way to the bank of the white water river, where they calmly surveyed their situation and proceeded to do everything they could to ensure their rescue. The killer in so many disaster survival situations is panic. But anxiety and worry never came into play for these 3 survivors, who took the following 6 smart survival steps that you will want to remember the next time something goes wrong in the wilderness.

1 – Informed friends and family members about their plans

This is probably the number one mistake made by most campers, kayakers, weekend hikers and other outdoor enthusiasts. People very seldom file a detailed plan with their friends or family members. Friends and frequent kayaking companions Ray Richardson, Heidi Nebeker and Kimberly Baker filed a detailed plan of their kayaking trip, including approximate times for their departure and return.

They did not lose their cool. They kept calm and rational, and took stock of their situation. They had survived what could have been a deadly situation, and were now safe on dry land. They understood they may be in the wilderness for a while, since they had planned for a 2 day trip. They also knew that if they could make it through those 2 days, their friends and family would know something was wrong, since they had filed a detailed plan with them.

They used the torn inflatable kayaks and natural resources to create a shelter. Shelter is extremely important in a wilderness survival situation, and is usually the very first thing you should go about procuring or creating.

4 – Rationed their food and water

As part of a smart survival plan, the group took what little food they had and rationed it. They filtered water from the Gila river they had been kayaking in and even ate what natural food sources they could find. Smart survival skills right there.

5 – They used what technology they had available

All of the kayakers had smartphones. But in the wilderness where they were located, they could not immediately get a signal. However, they did not quit trying. They kept moving around until, 9 hours later, they were able to shoot a text message out to a friend, saying they needed help.

6 – They quickly created an SOS signal

Signal fires and SOS signs made out of mother nature’s resources have saved many lives. That is the case with these 3 hikers, who built an enormous SOS sign out of tree branches. The sign was more than 10 feet tall from bottom to top and smartly located in an area that had high visibility from the air.

Arizona State troopers saw the SOS signal from the sky, and the rescue was underway. The 3 Arizona kayakers say the experience did not scare them off of the water, and they cannot wait to finish their Gila river trip.

Stay calm, ration what food and water you have, and eat and drink off of the land if at all possible. Build a shelter, and create some type of signaling device, ground signal, SOS or signal fire. And if you have a smartphone, tablet, laptop or some other type of consumer electronics that may help speed up your rescue, keep attempting to put the technology to good use.

Too many times we see wilderness disasters end in tragedy. Follow the lessons put forth by these 3 levelheaded Arizona lovers of the great outdoors and you too can survive when things do not go as planned.