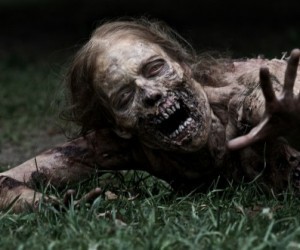 Could you survive a zombie apocalypse? Or would you quickly become just another member of the undead masses, fueled by a desire to eat human brains? There are 20 children aged 8 to 12 that know the answers to those questions due to a recent harrowing experience they underwent at the hands of a few survival camp staffers. The Chicago children learned how to ration food and protect themselves in a survival situation while fending off brain munchers at the Burr Ridge Park District’s Zombie Adventure Camp.

The week-long survival camp teaches children how to start a fire in the wilderness, and perform first aid procedures when caught out in the wild. Camp survival instructor Kenzie Stednitz noted that the children also learn to find natural water sources, as well as how to construct self-defense weaponry from natural objects. Valuable teamwork skills and the ability to stay calm in the face of disaster are 2 other important lessons the children learn at the camp.

While the zombie theme is appealing to the children, the lessons they learn can be applied to any possible survival situation. The week begins with the campers divided into 2 equal teams. They build shelters at their base camps, and nearly immediately have to learn how to keep zombies (played by camp staffers) from making a meal out of their grey matter.

The Zombie Adventure Camp initially began in August of 2015 and will run twice annually. Similar zombie survival courses, camps and one-day events are held throughout the United States and abroad. The current social zombie phenomenon appeals to young and old alike. So it just makes sense to use that fascination to attract and educate children and adults in sensible survival skills for any real disaster survival situation.

The children wear tear-off strips of clothing on a belt around their waist. If a staffer zombie strips a camper of one of his flags, that camper also becomes a zombie. However, the newly undead camper can be cured and revert back to human form if given the antidote (grape juice).

The grape juice and other food and drink packages were hidden all over the camp. The camp attendees were taught where to look for and how to identify plant food sources. The grape juice, food and other beverages were a reward whenever campers used their newly taught survival skills to locate and identify natural food and water supplies.

Hopefully these kids will expand upon their newly learned survival skills, and even be inspired to take their emergency preparedness tactics into their adult lives where they can prepare a legitimate survival plan that includes strategic supply procurement of emergency food, water, gear and shelter.