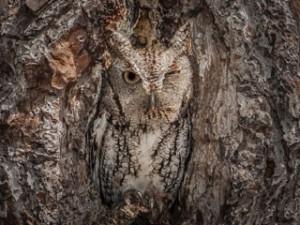 The “Gray Man” (alt: grey man) concept is based on the natural lack of attention that the color gray draws to itself. By becoming a gray man (or woman) you camouflage yourself by hiding in plain sight. This is one of the most effective disguises you can ever wear, and is practiced by accomplished spies and espionage professionals.

For disaster survival, this can be a life-saving tool. You want to be seen as a non-entity. When people happen to look your way their eyes pass right over you. They don’t view you as a threat. You don’t appear to have any possessions worth taking. Even if you’re a trained fighter, excellent at hand-to-hand combat, you never go out of your way to reveal this skill set.

Never wear bright colors. Avoid bright white. Black, dark brown and gray clothing, as well as a physical appearance, is what you want to shoot for. Think about the flat gray appearance of a countryside or wooded area at twilight, or just before the sun rises, and extend that dull, lifeless projection to your personality, clothing and physical appearance.

One way to become the gray man is by following the next camouflage tip.

After the Vietnam War, many war veterans with post-traumatic stress disorder ended up living on the streets. If you are more than 45 years of age you probably remember encountering these people from time to time. They shuffle along, sometimes talking to themselves incoherently. They are often greasy, dirty and smelly.

These poor war veterans who should have been treated so much better are virtually invisible. So are other homeless men and women living on the streets. Embrace this look, and you will be effectively ignored by most everyone. If someone does approach you, simply shamble by, as if you never saw them. Embrace the homeless look and you can move about without encountering much, if any, resistance.

There is an old saying which states, “when in France, do as the French do.” This is an excellent disaster survival disguise technique. If your survival party has to make it through a section of town frequented by gang bangers and street thugs, you had better dress and act the part.

If you are trying to traverse backwoods cities and villages, dress, walk and talk like a country bumpkin. Remember at all times to look and act like a local. This simple survival camouflage technique allows you to blend in to your surroundings, wherever you are. This includes disguising your possessions.

Disguise Your BOB (Bug Out Bag)

Get a couple of old burlap bags or heavy, dark colored pillowcases. Put your survival material from your bug out bag into these deceptive containers. Place trash and other misleading items on top of your valuable survival gear. Rub dirt, grease and grime on the exterior of your bag. Disguising your bug out bag is just as important as camouflaging your own appearance to make yourself unnoticeable in a disaster environment.