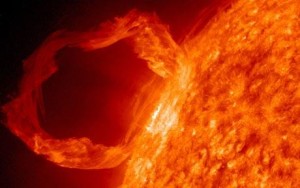 Solar flares are one of the events that many disaster preppers have on their radar. There are 3 good reasons why this potentially disastrous natural effect worries so many in the disaster preparedness community.

What Exactly Are Solar Flares?

A solar flare is just what it sounds like. It is a massive “flaring up” of solar activity. This creates unbelievably high levels of radiation that are created when magnetic energy associated with sunspots is released. The larger the solar flare, the bigger the potential problem for humans because of that huge radioactive pulse.

The National Oceanographic and Atmospheric Administration (NOAA) has a rating system for solar flares much like the one that is used for hurricanes. There are 5 solar flare categories, A, B, C, M, X (listed in order from weakest to strongest). Each category is 10 times more powerful than the one preceding it. In each of those separate categories, there are 9 subdivisions, again, according to strength.

However, X category solar flares have no measurement cap at 9. In 2003, for example, a solar flare measuring X28 on the NOAA scale was registered, the biggest and strongest solar flare that has ever been recorded.

Research dating back to the late 19th century shows that how wild and crazy you feel can often times be directly related to an increase in solar flare activity. That’s right, the 11 year cycle the sun naturally makes in relationship to earth causes trackable and predictable changes in societal and human behavior.

Even if a massive solar flare does not damage or shut down the communications, technology and electrical grid systems where you live, you will still be affected. Russian Professor A.L. Tchijevsky was so disturbed by his solar flare research as it affects human behavior that he presented a special paper to the American Meteorological Society at Philadelphia in the early 20th century.

He tracked the natural 4 part cycle of the sun noting which years they each occurred, which includes:

He then separately recorded particular human movements over that same time frame. These included things like how influential leaders were upon individuals, and how easy it was to get “the masses” excited or concerned over a particular idea. How easily large groups of people became incited, over what size area increased human excitability occurred, and the “integration and individualization of the masses” were all tracked.

The results were startling to say the least.

The professor’s Index of Mass Human Excitability covered in-depth research from 500 BC to 1922 AD. In all, 72 countries were painstakingly studied. A correlation was quickly discovered.

“At least 80% of the most world-shaping and socially-changing events occurred when the maximum amount of sunspots and solar flare activity was recorded.”

He also found that human beings are easier to repress during periods of low solar activity, categorized by the solar cycle listed as “solar minimum”.

How Politicians and World Leaders Have Used This Knowledge Against You

Even though this information was released to a public research organization in the early 20th century, you probably have not heard about. There is a very good reason for that.

Politicians can easily track the 4 stages of the regular and predictable 11 year sunspot cycle. Accordingly, they know whether they should attempt to repress you, or get you unnerved and excited, inciting violence which allows them to cater their message to the very riots and social unrest they have intentionally caused.

Global unrest due to race riots, natural disasters, economic problems and class inequality seems to be on the uptake in the last few years heading into 2015. According to Professor Tchijevsky’s research, that is no uncomfortable accident. Sunspot and solar flare activity should peak between 2015 and 2017. This means that the irrational excitability and sun-driven rioting, as well as wild and dangerous human behavior that has been increasing lately, will continue to create situations where disaster preparedness and emergency survival skills are needed more and more each and every day.  Securing an emergency food supply, water supply and other essential survival supplies is more than just a good idea in this day and age.